Elizabeth Poston in the News.

At a time when the destruction of virtually all the Green Belt Forster Country seems almost inevitable, it is good to realise that its cultural heritage is bound to live on and, in the case of its heritage of music, to be aware of several happenings this year that prove the point.

The first is an exhibition organised by the Royal Academy of Music Museum, Hitting the Right Note to highlight the achievements of around twenty five of its amazing female alumnae from its earliest years through to today which will, of course, include Elizabeth Poston.  Featured will be a biography and photographs of Elizabeth, facsimiles of her handwritten scores and, hopefully, items to do with the musical codes she used in wartime BBC broadcasts which are being sought from the Polish Underground Movement Study Trust. It opens on 29 June and will continue until 18 April 2019; opening times of the Museum in Marylebone Road are 11.30 am – 5.50pm Monday to Friday and 12 – 4 pm on Saturday but closed on Sundays and Bank holidays and the whole month of December.

Then, in the Autumn, some of her many songs are to be performed at two concerts.  The first arises from Elizabeth’s friendship with the cellist/composer William Busch which started in 1942 when she was at the BBC and he had thanked her for her performance, with singer René Soames, of one of his songs, Rest, a song whose fine quality she very much appreciated.  Musically they were on the same wavelength and kept up a vigorous correspondence until his untimely death in 1945, at one point agreeing to each set the poem Snowdrops in the Wind.  The concert celebrating William Busch’s Life and Times will take place on Saturday 20 October at 2.00 pm at The Hinde Street Church in Marylebone and the singer will be the mezzo-soprano, Diana Moore, well known as a leading exponent of English music.

Diana is also known for shining the spotlight on female composers, in which role she proposes another programme in November featuring Elizabeth as one of five or six chosen. As well as singing her songs, she will focus on ‘Elizabeth’s life and achievements in the field of music, her support of composers, and her impact on women in music going forward.’ It is likely that we will hear both versions of her Sweet Suffolk Owl. 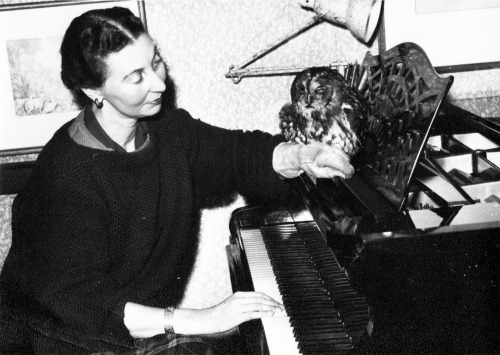 The other development, now that Elizabeth Poston’s archives of private papers and music have been made available and safely deposited at the Hertfordshire Public Records Office and the British Library, respectively, has been the production of a catalogue of her compositions, including, particularly, unpublished material which might otherwise be unknown or forgotten.  Many people have heard of her Jesus Christ the Apple Tree without realising that she wrote or arranged nearly 1000 works!  The catalogue runs to over 57,000 words about half of which deal in detail with her connections with both the music and her many musician friends associated with it.  It will be available in a few weeks time when details will be posted in on my website, johnsalabaster.com.