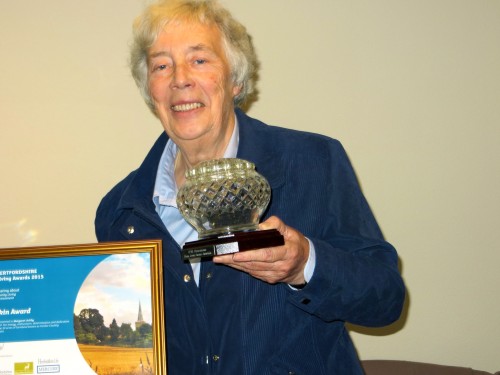 The Peterkin Award for a Rural Living Champion is presented annually to an adult who has made an outstanding contribution to rural living in Hertfordshire. This year there were six nominations. We are very pleased to announce that Margaret Ashby (co-founder of FOFC and currently a patron) was given this award at the 2015 CPRE Rural        Living Awards Evening at County Hall, Hertford, on 20th October. http://www.cpreherts.org.uk/
Margaret was recognised for "her determination and dedication in ensuring the protection of a precious area of Green Belt known as Forster Country" for over thirty years. The judges' citation went on to say that "it is very unlikely that, without Margaret's energy and enthusiasm, this piece of countryside would still be undeveloped."