The walk can be either a short walk from the High Street taking in a little of Forster Country or the mainly open country walk with which we celebrate Forster’s birthday on January 1 each year or a combination of both.  The points with letters e.g. point E correspond to points on the map.

You don’t have to start the walk at the High Street although the description starts there.  The Birthday Walk section starts at St Nicholas church

If you come by bus then the High Street and Graveley are the best option, depending on your choice of route.

Car parking is often possible near St Nicholas Church (for either route) or Graveley Church, not far from the Birthday Walk route.

The modern railway station (not the one Forster knew) is about a mile or 1.5 km south of the High Street start. Tesco is visible as you leave the station ticket office; from there walk over the footbridge and up the High Street to the Green with a War Memorial.

There are public toilets in Middle Row, off the centre of the High Street, otherwise no facilities except in pubs.  Thanks to the old coaching route, there are plenty of pubs in the High Street and two in Graveley. 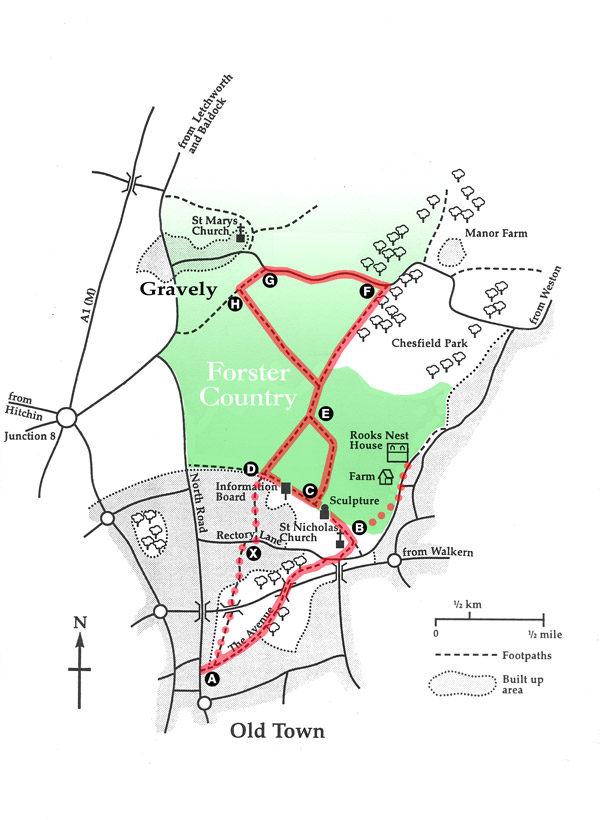 The Forster Country Walk starts along The Avenue from beside the main entrance to The Thomas Alleyne School at the north end of Stevenage High Street. This is pointA.

The Thomas Alleyne School was originally founded  in 1558 as a grammar school by the will of Revd. Thomas Alleyne, Rector of Stevenage,.  It has evolved over the centuries with variations of name and status.  It was known as Alleyne's Grammar School in the last century, then Alleyne's when it became comprehensive in 1969.   It was given its present name when it merged with Stevenage Girls' School in 1989.  As you continue up The Avenue, you also pass Barclay School.

The Avenue is described in Chapter 22 of Howards End.  Margaret Wilcox had arrived by train, when the station was in Julians Road.  She ”crossed the village green and entered the long chestnut avenue that connects it with the church.”  She “strolled slowly, stopping to watch the sky that gleamed through the upper branches of the chestnuts…” and pondered on mythology.

The route of The Avenue was there  long before Forster’s time.   In his time, the route would have been direct to the Rectory and church.   The trees were planted in three sections, the middle section in 1756 and the High Street end in 1876. The final section, which has largely been demolished and replaced by the pedestrian bridge over Martins Way as part of the new town, was planted in 1935.  Many of the chestnuts were victims of the great gale of

When you reach Rectory Lane turn right to St Nicholas Church. Point B.

St Nicholas Church is the ancient parish church of Stevenage, situated where the original Saxon village of Stigenace grew up. In the Middle Ages, developments along the road from London to the north, which became known as the Great North Road, became the Old Town High Street.

The Saxon church on this site was replaced by a Norman one from about 1100 AD, when the great, thick-walled flint tower was begun. The church structure has been partially rebuilt so many times that it is a patchwork of nine centuries of local endeavour. It is a Grade 1 listed building and includes a south porch, nave, north and south aisles, choir, Lady chapel, Trinity chapel and vestry. The chapels were both endowed. There are many items of interest in the church including an ancient stone font with a medieval carved wooden cover, six 14th century misericords, a carved reredos dating from 1890, a Victorian organ and a number of stained glass windows, one of which contains scraps of mediaeval glass.

Margaret Wilcox’ walk led her ”into a road, smooth but narrow which led into the untouched country”. She was going to Howards End; this house is based on Rooks Nest House, Forster’s childhood home. He writes about it in an appendix to the Penguin edition of Howards End. It has had other famous residents. For many years it was the home of composer Elizabeth Poston, now best known for her carol The Apple Tree. After that, Malcolm Williamson, Master of the Queens Music at the time, lived there.

Rooks Nest Houseis a private house, not open to the public. Weston Road still goes there but as it passes the church and cemetery it is narrow with no pavement and is not recommended. If you wish to see the limited view of the house from the public road, it is safer to go straight through the Churchyard and cemetery. This route is not waymarked.

To continue the Forster Country Walk, enter the Churchyard and follow the path leaving the Church on your left.  You will pass on your left, a celtic cross marking the grave of Charles Poston, Elizabeth’s father. Just before the large memorial to Barclay family memorial, turn left to the exit from the churchyard with two important features just before the kissing gate leading into Forster Country.

The Only Connect sculpture is the only monument in the world to E.M. Forster. It is a commemoration of the 1994 decision by the Secretary of State for the Environment to alter the Green Belt boundary to protect the Forster Country within it. “Only Connect” is the subtitle of E.M. Forster’s Howards End and the theme running through the whole of the novel. The Sculptor was Angela Godfrey, BA, ARBS.

The sculpture was commissioned and erected by The Friends of the Forster Country, who were assisted with grants from Hertfordshire County Council and Stevenage Borough Council.

Alongside it is a Braille Plaque mounted on the same Derbyshire stone. The text describes the Only Connect monument.   It was erected in 2005 as part of the 100th anniversary celebrations of Elizabeth Poston's birth.
As you pass through the kissing gate, you enter Forster Country. Go down the footpath and at the lowest point turn right. PointC. As you go along this path you can see, on your right, the conical roof of the cemetery office, the recent extension of the cemetery, the various buildings of Rooks Nest Farm and then Rooks Nest House. Follow the path round to the left.

At the top of the slope, pointD, there is a choice. If you want the longer walk, in a loop near Graveley turn right. If you are ready to return, continue on a short way alongside the field until the path goes through the hedge. (There are also unofficial routes going through the hedge earlier but all routes converge near a pylon) Now ignore the next few paragraphs about the loop until the paragraph starting “the Return”.

Rooks Nest House is usually best seen as you walk under the power lines (depending on crops). These power lines go to the large transformer station just beyond Little Wymondley. Apart from their main function, they are useful as a navigation aid when walking in the countryside! Forster referred to the pylons, all too visible from the house, as “naked ladies”.

Go through the gap in the hedge to a T-junction of footpaths. The escarpment on the horizon is the eastern end of the Chilterns. You can also see Hitchin, thehigh point with trees being the top of Benslow Lane hiding the station beyond. You will be returning to this point but for now, continue on with a wood on your right to a road and a lodge for Chesfield Park. PointF. This park was in Victoria Glendinning’s mind when she wrote Electricity. Turn left down the road which is not particularly busy but keep eyes and ears open for cars. You pass an old chalk pit and Ledgeside plantation on your right as you reach a dry valley.

(If you want the village of Graveley with a church, two pubs and a fine duck-pond bordered by picturesque cottages, continue down this road but note the route you need for the return.)

After a sharp bend and the first few houses, at pointG take a path to the left for 200 yards to pointH, then another left back to the T-junction where you go right to the where you left the main route. Turn right for a few yards down the field edge until the path goes through the hedge at pointE.

The Return With the hedge behind you, head towards the modern houses. Just before them at pointD there is another choice.

The quickest return route is rather dull and only marked by discs. To use it go straight on into the cul-de-sac of houses, then left following a road, then a footpath alleyway to Rectory Lane, PointX. Turn right for a few yards and then cross to use another footpath leading to the open space used as playing fields. The path goes under Martins Way to take you back to the start.

A more attractive route is to turn left which will take you back to the Church to return the way you came. On your way down, just before the lowest point, there is an open space to the right. If you divert from the path into this space, you will see an information board welcoming people entering Forster Country here from Chancellors Road.

Another possibility is to use Rectory Lane from the church down to the footpath turning left by a house called The Driftway, past playing fields and under Martins Way.